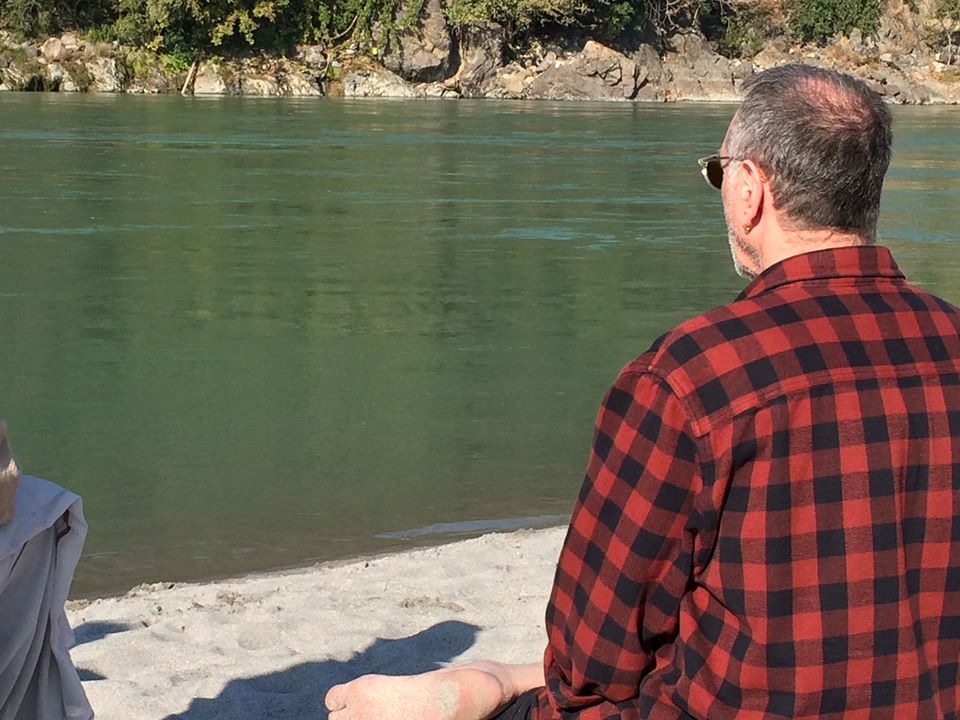 Q: When you sing other lineages’ Names like “Tara” or “Jesus on the Mainline” like how do you integrate that with all the other Names that you got from the Vedic tradition?

“My parents were about as Jewish as the Pope. So, but still, I didn’t know much about Jesus and then I get to India and He looks at us and says, ‘Hanuman, Krishna and Christ are the same.’ Terrific. Who wants to hear that?  I’m in India. You know? But He started talking to us about Jesus and whoa, it was powerful. Really powerful. I have to say, it was more powerful than the way He spoke about Hanuman, Krishna and Ram.” – Krishna Das

Q: Hi. Yesterday you were saying that all the mantras are love.

KD: All the what?

Q: All the mantras are essentially love.

Q: And today you were talking about how we get what we need. And I kind of have this theory that I’ve been running with that certain mantras just come to me and I’ve been thinking maybe it’s my Guru sending me what I need and I just wondered if that happened to you or what you kind of thought about that.

KD: I never thought about it. But if that thought works for you and that helps you do your practice more sincerely and more completely, that’s a good thing. But ultimately, it’s another thought. Some thoughts are helpful because they help us let go and they help us enter more deeply into our self, and some thoughts aren’t helpful.

Q: Hello. You spoke about the heart connection to consciousness. Could you touch a little more on that. Just, you said it’s not heart chakra but it’s a different connection?

KD: No. Because I don’t know. I was repeating what I read that Ramana Maharshi said, who was one of the great saints that ever lived. So, whatever He said is cool. So, that’s what He said. He said there’s this consciousness is always present and there’s a spot in the body that we kind of, like a little… that fills up the body with the consciousness. When we leave the body, the body’s just inert. There’s no consciousness in the body itself. It’s just flesh and bone and blood and pus and all that stuff.

Q: Could I ask you anything that you have taken from that for your life?

KD: You could ask whatever. Ask.

Q: From that insight that He gave you?

Q: I have a question around, in certain moment you were given the name “Krishna Das.”

Q: But you were born “Jeffrey.”

KD: It’s just more stuff to deal with. My real name was “Driver.” For a year, Maharajji called me “Driver” because He took Ram Das’s keys away to the van and He gave them to me. “Driver.” Then I was going to kill myself because He didn’t give me a Name. So, finally He gave me a Name. He said, “Arjun. Krishna. Nay. Krishna Das.” I said, “Krishna Das? I’m a Hanuman guy. What’s that stuff?” And He just laughed. He said, “Don’t worry. Hanuman served Krishna, too.”  It didn’t change me at all. It just gave me pride which was hard to get rid of. You want a Name?

KD: I like it. I sing what I like. Right? What’s the big deal? If I don’t like it, I don’t sing it. A Name is a Name is a Name. Right? Different traditions, same God. Big deal. You know? Come on. Argue. Come on. Come on. What do you think?

KD: You know, Maharajji talked to us about Jesus. Listen, I’m Jewish from Long Island. My parents were about as Jewish as the Pope. So, but still, I didn’t know much about Jesus and then I get to India and He looks at us and says, “Hanuman, Krishna and Christ are the same.” Terrific. Who wants to hear that?  I’m in India. You know? But He started talking to us about Jesus and whoa, it was powerful. Really powerful. I have to say, it was more powerful than the way He spoke about Hanuman, Krishna and Ram. For us, He Himself would just like, you could see how intense it was for Him to talk about Jesus. “He never died. He felt no pain on the cross. He loved everyone. He loved the people who nailed Him to the cross. He tried to die but He couldn’t. He became immortal.  Why? Because He never thought of Himself. Thoughts of “Me” never arose in that Being. Why would they arise? There’s only God in there. There’s no “Me” anymore.” So powerful and deep.

KD: Yeah, there’s a lot of songs I like that I sing.

Q: I was wondering if you’d ever practiced Vipasana meditation.

Q: Were you already into kirtan chanting?

KD: You know, somewhat. Not that much at the time. Not yet. That kind of started…when we started… not so much at that moment during those courses. I had just got to India and then after a couple of months, Maharajji sent us away and disappeared and then we went to Bodhgaya for a few months and then after that we found Him again. You know, the bus story? You know the story of the bus? You don’t know the story of the bus? So, we were all, it was a break between like, the fifth and the sixth ten-day course. There was like a day and a half between the courses and this guy arrived in a huge beautiful Mercedes bus that he had driven across from Europe to India. And he offered. He said, “Anybody who wants to go back to Delhi, I’ll give you a ride in the bus.” So, we were pretty much, me and the other folks… Ram Das had shown up and done a few of the courses and the other Westerners who had come to see Maharajji were there, so we had decided, it’s time to leave, let’s go find Maharajji. So, and Sharon was there and she still can tell you how she felt as she watched that bus drive away. Anywhow. So, we took off and we’re on the way to Delhi and one of the guys in the group said that he had been to the Mela in Allahabad. A Mela is a festival that happens every year in different places in India and it’s a gathering of pilgrims and spiritual aspirants and yogis and teachers and all those people. And there’s… one of the places it happens is in Allahabad at the Sangham where the Ganga, the Ganges and the Yamuna and the Heavenly River, the Saraswati, comes together. “Sangha” means “together.” Coming together. So, we were going to pass within a few miles of that on the way to Delhi, so it was a big discussion about whether we should just go right to Delhi, which was the Ram Das group, or whether we should go visit the Sangham and see what was going on there, sounds cool. That was my group and almost everybody else, other than Ram Das. Ram Das just wanted to get to Delhi and that was it. “We’re going to Delhi, we’re going to find Maharajji. That’s all we’re going to do.” But there was a lot of discussion about it, for hours. So, finally it was decided that we’ll just go. We’ll see it. Boom. Then we’ll turn around. Then we’ll head to Delhi so we could make it by nightfall. That was the idea. So, the bus pulls into this area where there had been maybe ten million people up until about two days before. Now, everybody was gone. There was hardly anybody there. Ten million, that was forty years ago. Now there’s 20 or 25 million at those festivals. They call them “Melas.” “Kumbh Mela.” “Ardh Mela.” “Magh Mela”. So, the bus pulls into this, the Mela grounds, which is absolutely deserted. Nobody. A dog. I remember there was a dog running across that thing. So, we pulled into this big vast place where there’s nobody. A vast field. So, the bus starts making this big turn, maybe this way and so Danny said, “Well, you know, there’s a Hanuman temple over there in the corner. Why don’t we go have darshan of the temple, see the temple, and then we’ll head back to Delhi.” Ok. So, the bus comes around this way and it’s at the edge of the field and there’s like a path at the edge of the field and the bus is going this way and who’s walking the other way? Maharajji. And He’s holding somebody’s hand and He’s walking and the bus passed Him and one guy just happened to see Him. And they said, “Wait, there’s Maharajji!” And the bus and we all went running off the bus and everybody’s weeping and crying and so then Maharajji said, “Ok, everybody get back on the bus and follow us.” He hops in a little rickshaw with Dada, this man with Him and this huge big silver Mercedes bus follows this little cycle rickshaw all through the streets of this little village and the rickshaw stops in front of a house and Maharajji and Dada go inside. We didn’t know Dada yet. They go inside and the bus stops and we get off the bus and we’re like, “What do we do now?” We’re looking around. And the woman comes out and says, “Come in. Come in. Come in and take your food.” And we said, “Food? There’s like 27 of us. What do you mean, food?” “Well, when Maharajji woke up this morning, He told us to prepare food for 27 people. That you would be coming later.” So, who decided that we should go see the Mela spot? We had… it seemed like we were making a decision, to us. There was a lot of discussion. There was anger and there was a lot of emotion, you know. Ram Das. “I want to find Maharajji. I want to get to Delhi.” I mean, it was intense. Then finally, “All right, all right, all right, we’ll just go by there and then we’ll take off.” We thought we did that. How could that… how did we do it if eight hours earlier He said to prepare food for 27 people? That was 26 people plus the driver.

This was happening every day. All day.

All right. That’s it. Thank you.